JUDY WOODRUFF: Florida is one of the biggest prizes on Election Day. It is also one of those prized swing states that has voted for the candidate who has won the presidential election for more than 20 years. That is why both President Trump and his Democratic rival, Joe Biden, have been campaigning there in the last day. Yamiche Alcindor has our report.

YAMICHE ALCINDOR: It's a key demographic in the state. In 2016, voters over 65 years old were more than 20 percent of the electorate in Florida. They overwhelmingly backed President Trump, helping him pull off a narrow win here. But in an Emerson College poll released this week, Biden leads with those same voters by six points. Florida's 29 electoral votes are critical for both campaigns.

DONALD TRUMP, President of the United States: It's great to be back in my home state, Florida, to make my official return to the campaign trail. 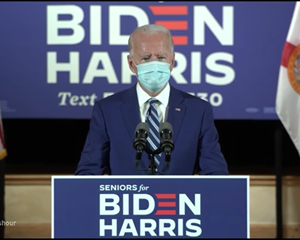 YAMICHE ALCINDOR: Just last night, President Trump rallied voters in Sanford, Florida, his first campaign rally since he was hospitalized with the coronavirus.

MIKE PENCE, Vice President of the United States: I think the choice in this election is whether America remains America.

CAROLINE KUFFNER, Voter: I have never seen a line this long. It's really amazing.

YAMICHE ALCINDOR: Those hoping to vote early in person, from Georgia, to Kentucky, to Texas, have faced long lines, in some places waiting hours.

YAMICHE ALCINDOR: Despite the already high turnout, voting experts warn it may take days after polls close on November 3 for all the votes to be counted. For the PBS NewsHour, I'm Yamiche Alcindor.